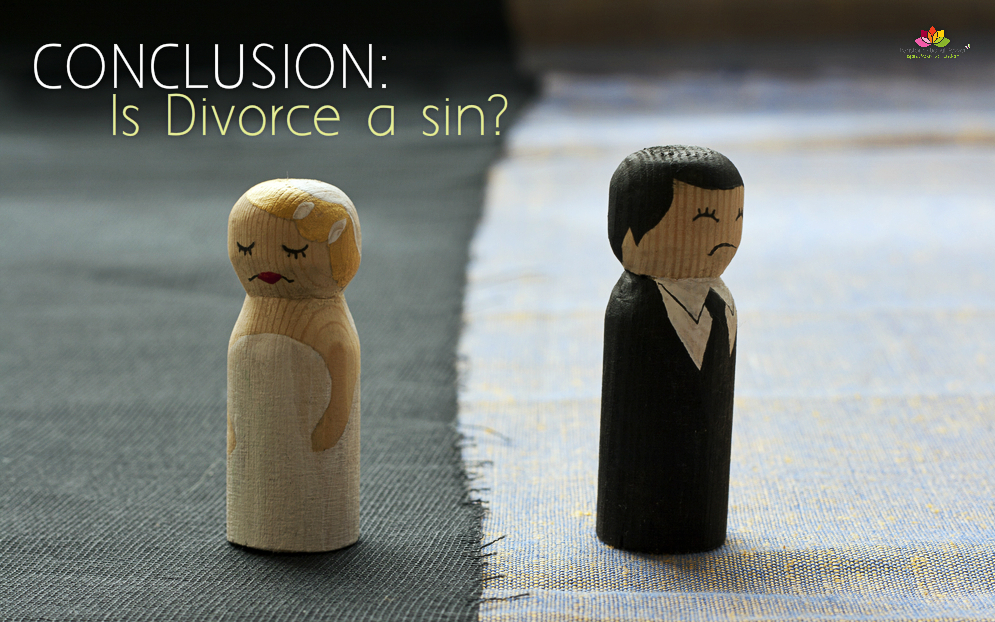 Many have raised the issue of abuse in relationships as a justification or exception for Divorce. Unfortunately, there is no scriptural basis for this argument – no matter how much sense it makes.

And on the issue of death, do understand God is not interested in your life – for it is nothing. He is more interested in the salvation of your soul. This is the truth, even if you do not want to hear it.

So, let’s talk about “abuse” and what makes “sense”.

It didn’t make sense when God told a man to keep going back to a wife who deserted him, had taken harlotry and whoredom to a whole new level, prostituted herself to everyone possible, and left him with 3 children – 2 of them illegitimate.

It didn’t make sense either, after finding her ragged, torn, sick, dirty, dishevelled, destitute, and chained to an auction block in a filthy slave market, he was told to buy her back, redeem her honour AND continue in the marriage.

She had become a repulsive shadow of the woman she once was, and so worthless she had been sold to the LOWEST bidder. He bought her for fifteen shekels of Silver and thirteen bushels of Barley – a pitiable amount; illustrating the depths to which she had sunk.

Whilst this is commonly touted as the “greatest love story” in Christian circles, it is really a prime case of emotional spousal “abuse”.

Truth is, God doesn’t care about your reasons for disobeying Him – no matter how much “sense” they make to you, or how unfair you think it is. If you think this is harsh, please read on.

It didn’t make sense when a blameless man, with ALL the power in Heaven and on Earth, was beaten, tortured, scourged, flayed, stabbed with a sword, and nailed to a cross – just so that YOU, “Gomer” that you are (and still are), could be saved and redeemed.

Neither did it make sense when God ignored this man’s tears, His plea for help, and wish not to die for someone as undeserving as you. Remember you WERE bought at a price? Now, who do you think paid it? And with what?

It didn’t make sense too, when those more holy, more righteous, more justified, and vastly more deserving than you were stoned to death, burned at the stake, crucified upside down, beheaded on a stone, stabbed in the back, skinned alive, and clubbed to death.

This is how the disciples died – with the exception of John. And what do you think God was doing while this was happening? I assure you, He wasn’t thinking about what makes “sense”.

You see, NOTHING can come between God and His Kingdom. Not your pain, not your suffering, not your disobedience, justifications, excuses, explanations or whatever.

We talk like God is so foolish, He didn’t know couples would abuse and mistreat each other when He created marriage or said He hates divorce. As already made clear, you have the free will to divorce if you choose to, but to contend with God over His truth is pure lunacy.

Truth is, no marriage is irredeemable, and no difference irreconcilable. However, because we failed, we expect God to rubber stamp our decisions, and seem to be under the delusion He must “understand” or agree with them.

Rather than arguing and trying to prove a point, people should simply go to God, cap in hand, common sense and “real talk” in pocket, head bowed, ego humbled, and APOLOGISE for their inability to follow His word.

The Scriptures say “If we confess our sins, He is faithful and just to forgive us our sins” (I John 1:9).

Divorce is no less “forgivable” than any other sin. And yes, this makes even remarriage possible. All we have to do is accept responsibility, repent genuinely, and ask for forgiveness. And. It. Is. Done. The slate is wiped clean, the debt is cancelled, and everything is reset.

How hard can this be?

—————————————
“Whoever conceals his transgressions will NOT prosper, but he who confesses and forsakes them will obtain mercy” – Proverbs 28:13

View all posts by K.B. Davies